Burnaby is situated at the centre of the Lower Mainland region. It is on the corridor between Vancouver to the west and north, and Coquitlam and New Westminster to the east. Burnaby is the third-largest city in British Columbia, and known as the Centre of Greater Vancouver. It is home to high-tech facilities, post-secondary education (Simon Fraser University and British Columbia Institute of Technology), and shopping (Brentwood Mall, Eaton Centre, Lougheed Mall and Metrotown).

Burnaby's population has grown to over 220,000. Its economic base is service, commercial and industrial activities. Community, business and personal service industries account for about 27 percent of the employment in Burnaby. In 1992, Burnaby celebrated its 100th anniversary and officially changed from the Corporation of the District of Burnaby to the City of Burnaby. This reflects Burnaby's growing role as an urban centre.

Recreational facilities and The Arts are second to none. There's theatre, (Michael J. Fox Theatre, Shadbolt Centre for the Arts), Swangard 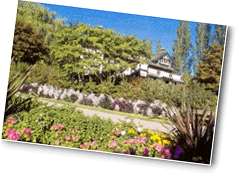 Stadium, home of the Vancouver 86'ers, the Labatts 24 Hour Relay, and the Harry Jerome Track Meet. There are also plenty of beautiful, public parks located from Barnet Marine Park in the east to Central Park in the west. Golf is also a favourite pastime. Commuting by car around Burnaby will take between 10-20 minutes depending upon your destination and the time of day.

Skytrain is a better alternative as two lines travel through burnaby: The Expo line travels on the Kingsway corridor from downtown Vancouver to Surrey. The Millenium line travels from the Commercial Drive station (next to Broadway Station) along the Lougheed corridor out to New Westminster before looping back towards Vancouver.

One destination could be the Vancouver Canucks practice facility located at Eight Rinks, the largest ice facility in the world! (this is not a paid endorsement). The Canucks, and their opponents, practice times start about 10:30 a.m. depending upon travel schedules. Bring your skates! Or, how about Deer Lake Park, in the middle of Burnaby? It's always abuzz with activities.

From turn-of-the-century museums to live outdoor concerts by the Vancouver Symphony Orchestra, there is something for everyone!

Whether you are relocating across town, across the country or from another part of the world, when choosing real estate in the communities of Vancouver, Burnaby or New Westminster, choose Phil Moore & Doris Gee to assist you with all of your real estate requirements. Phil & Doris have over 55 years of combined real estate experience, and were been recognized for their abilities by being voted The Best Realtor/Agency by the readers of BurnabyNow.